What is Tensile Testing?

A tensile test, also known as a tension test, is one of the most fundamental and common types of mechanical testing. A tensile test applies tensile (pulling) force to a material and measures the specimen's response to the stress. By doing this, tensile tests determine how strong a material is and how much it can elongate. Tensile tests are typically conducted on electromechanical or universal testing instruments, are simple to perform, and are fully standardized.

Why Perform a Tensile Test or Tension Test?

We can learn a lot about a substance from tensile testing. By measuring the material while it is being pulled, we can obtain a complete profile of its tensile properties. When plotted on a graph, this data results in a stress/strain curve which shows how the material reacted to the forces being applied. The point of break or failure is of much interest, but other important properties include the modulus of elasticity, yield strength, and strain. 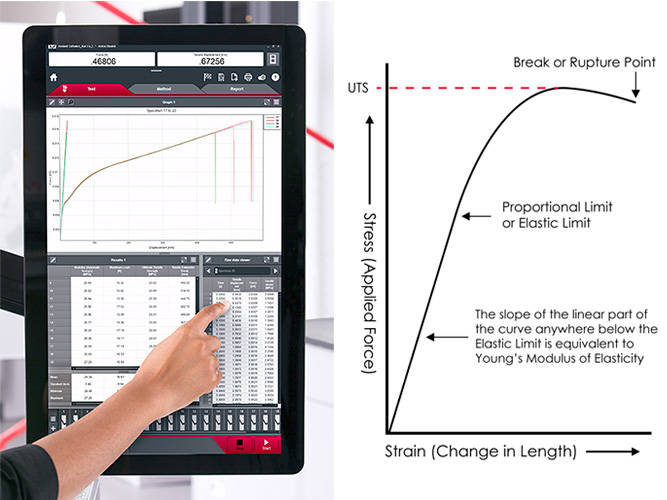 One of the most important properties we can determine about a material is its ultimate tensile strength (UTS). This is the maximum stress that a specimen sustains during the test. The UTS may or may not equate to the specimen's strength at break, depending on whether the material is brittle, ductile, or exhibits properties of both. Sometimes a material may be ductile when tested in a lab, but, when placed in service and exposed to extreme cold temperatures, it may transition to brittle behavior.

For most materials, the initial portion of the test will exhibit a linear relationship between the applied force or load and the elongation exhibited by the specimen. In this linear region, the line obeys the relationship defined as "Hooke's Law" where the ratio of stress to strain is a constant, or

. E is the slope of the line in this region where stress (σ) is proportional to strain (ε) and is called the "Modulus of Elasticity" or "Young's Modulus." 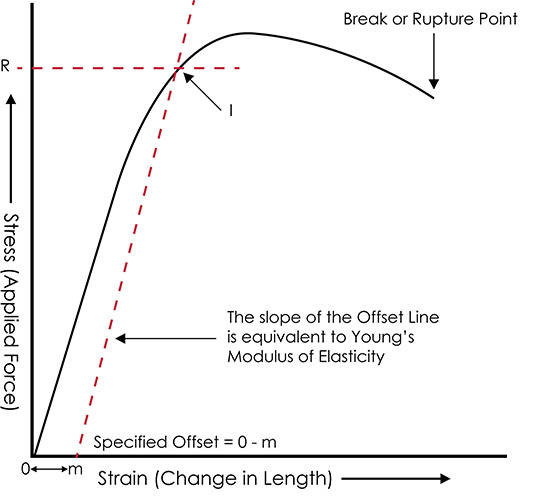 The modulus of elasticity is a measure of the material's stiffness which only applies in the initial linear region of the curve. Within this linear region the tensile load can be removed from the specimen and the material will return to the exact same condition it had been in prior to the load being applied. At the point when the curve is no longer linear and deviates from the straight-line relationship, Hooke's Law no longer applies, and some permanent deformation occurs in the specimen. This point is called the "elastic or proportional limit."  From this point on in the tensile test, the material reacts plastically to any further increase in load or stress. It will not return to its original, unstressed condition if the load is removed.

A material's "yield strength" is defined as the stress applied to the material at which plastic deformation starts to occur.

For some materials (e.g. metals and plastics), the departure from the linear elastic region cannot be easily identified. Therefore an offset method to determine the yield strength of the material is allowed. This methodology is commonly applied when measuring the yield strength of metals. When testing metals according to ASTM E8/E8M, an offset is specified as a percentage of strain (usually 0.2%). The stress (R) that is determined from the intersection point "r" when the line of the linear elastic region (with slope equal to Modulus of Elasticity) is drawn from the offset "m" becomes the Yield Strength by the offset method.

The tensile curves of some materials do not have a very well-defined linear region. In these cases, ASTM Standard E111 provides for alternative methods for determining the modulus of a material, as well as Young's Modulus. These alternate moduli are the secant modulus and tangent modulus.

We will also be able to find the amount of stretch or elongation that  the specimen undergoes during tensile testing. This can be expressed as an absolute measurement in the change in length or as a relative measurement called "strain." Strain itself can be expressed in two different ways, as "engineering strain" and "true strain." Engineering strain is probably the easiest and the most common expression of strain used. It is the ratio of the change in length to the original length,

. The true strain is similar, but based on the instantaneous length of the specimen as the test progresses,

, where Li is the instantaneous length and L0 the initial length.

Tensile tests are performed on universal testing machines. These machines are available in a variety of different sizes and force capacities ranging from 0.02 N to 2,000 kN. Most low force testing is performed on a tabletop machine such as Instron's 6800 Series, while higher force applications require floor model frames such as those found in Instron's Industrial Series.

A universal testing machine must be equipped with testing software and application-specific grips and accessories, such as extensometers. The type of material being tested will determine the type of accessories needed, and a single machine can be adapted to test any material within its force range simply by changing the fixturing.

Though there are many ASTM and ISO standards used for tensile testing, these are some of the most common: