A new Double Beam Shear (DBS) test method for measuring interlaminar shear (ILS) properties of composite laminates is described in a paper written, and presented at ECCM16, by Dr. Zhou of Loughborough University. The new method offers significant improvements over the existing Short Beam Shear and Iosipscu methods by promoting the dominance of ILS stresses, which leads to a consistent ILS failure mode. Furthermore, the new method is simple to set up and employs a simple, rectangular, specimen design. 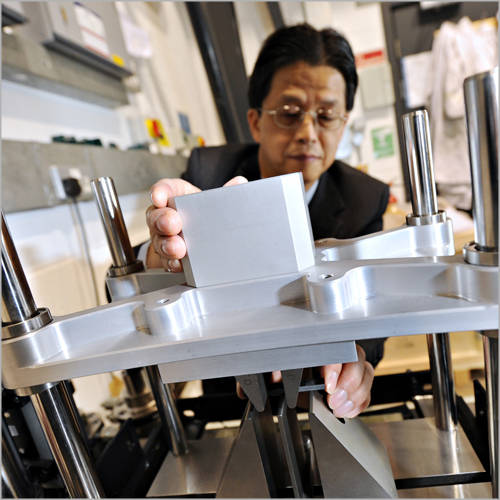 Gripping methods can significantly affect values and consistency of results in mechanical testing of composites. With a growing drive to measure and understand the dynamic behavior of composites, it is sometimes necessary to revisit previous methodologies for specimen gripping.

Tabs and Clamping Force
Various international standards have evolved for tabbed or tab-less specimen designs, as well as certain popular non-official methods, but only qualitative guidance is provided for clamping force.

Specimens of the same material were prepared with different tabs, clamped in hydraulic grips, with a constant cyclic load applied. The peak stress was 300 MPa, equating to 50 % of static strength, at a loading ratio of 0.1. Displacement was measured both at the actuator and directly on a 25 mm section at the midpoint of the gauge length. By stepping up the gripping pressure while calculating dynamic modulus for each cycle live, the significance of appropriate gripping and direct gauge length measurements becomes apparent.

Fig.1 shows the error generated by calculating dynamic modulus from the actuator position, as compared with the extensometer measurement. The implication of a negative error is that there is significant shear or slippage; the effect of this is equivalent to a more compliant specimen with a larger gauge length. By contrast, positive errors suggest a degree of over-constraint on the specimen, causing the ends of the gauge length to exhibit greater on-axis stiffness. 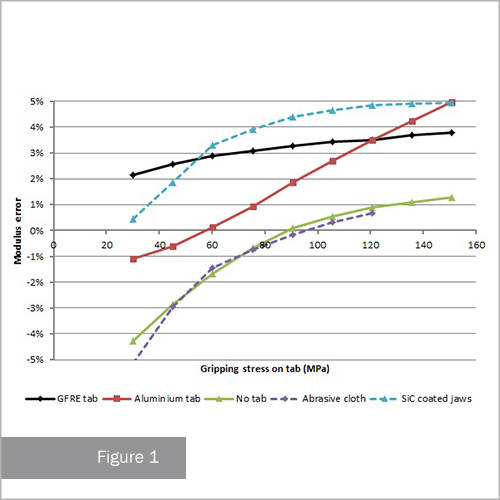 Cyclic Loading
It is fairly well known that composites under cyclic loading are subject to significant self-heating effects, through a combination of viscous heating and energy release through micro-fractures. Obviously this presents other experimental concerns which have been discussed elsewhere, but it facilitates identification of where strain and damage are being introduced. 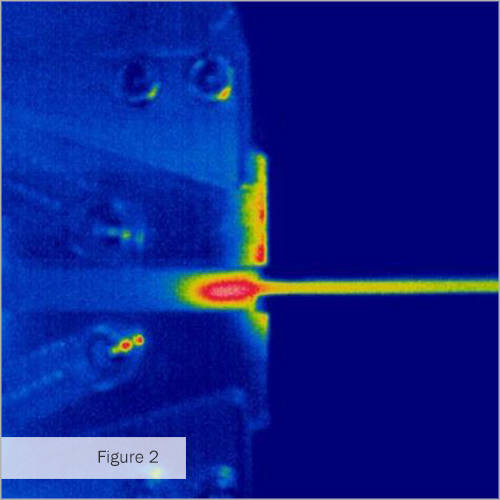 A basic thermal imaging camera was used to capture the temperature rise on the edge of the specimens (Fig.2 shows an example for standard GFRE tabs), from which line-scans were taken of the temperature along the center, as shown in Fig.3. 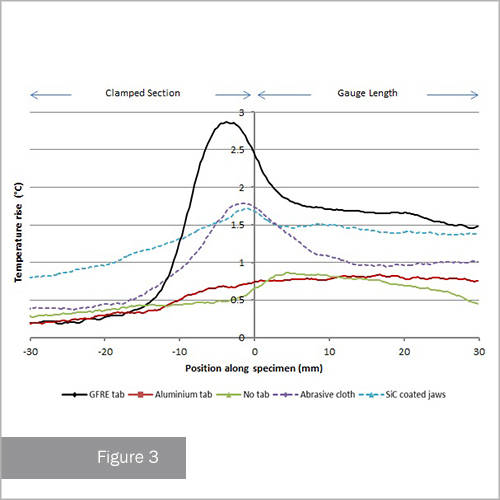 It is very clear that in the standard tabbed specimens, there is a very high degree of heating just within the end of the gripped section. The specimen gripped with un-bonded abrasive cloth behaved similarly. Using integral abrasive surfaces on the jaws, without tabs, seemed to reduce the sharp peak in heating, but caused more heat introduction further back into the grip, possibly due to sliding and abrasion.

By contrast, specimens without tabs, or with aluminum tabs, show very gentle transitions from gripped to free length. The implication of these data is that, especially in cyclic tests, the standard method of gripping composite coupons can easily cause damage and failure outside the gauge length, under un-representative loading conditions.

Conclusion
On preliminary inspection, the existing standard methods of gripping composites seem robust and tolerant of setup, especially for static tests. However, the evidence suggests that there are technical benefits to other approaches which have gained some popularity, but are not yet within international standards. With increasing interest in dynamic testing of composites, we believe that this is of even greater importance, and are working to evaluate further the effects discussed. 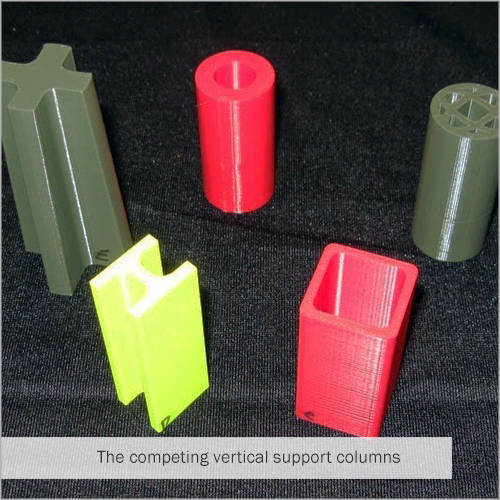 The Society for the Advancement of Material and Process Engineering (SAMPE) is a professional engineering society providing a community to share information on materials and process technology. At the SAMPE Seattle 2014 Conference June 2-5, professionals met for an international exhibition and conference aimed at education and networking. Apart from the Additive Manufacturing Contest, the Student Bridge Contest was another opportunity which allowed students to created miniature bridge structures with composite materials and compete against one another.

Instron was at the conference to engage with society members and sponsor the Student Additive Manufacturing Contest. For the contest, high school and college students designed vertical support columns that were then printed with a Stratasys 3D printer in Seattle and tested between platens of an Instron load frame. Joe Vanherweg from California Polytechnic State University came in first place with a column that held 4413.9 lbf. For a prize, he won a Stratasys MakerBot 3D printer. 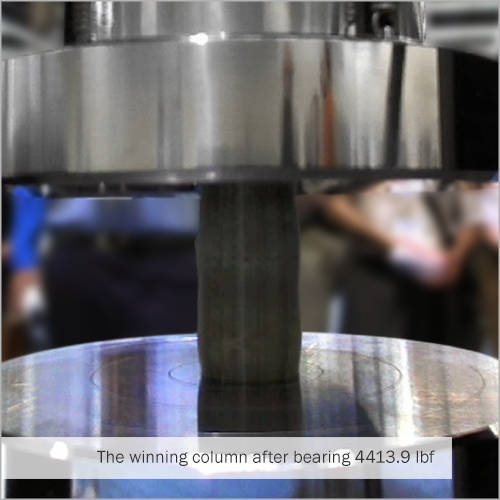 Do You Struggle with Managing Too Many Test Standards? 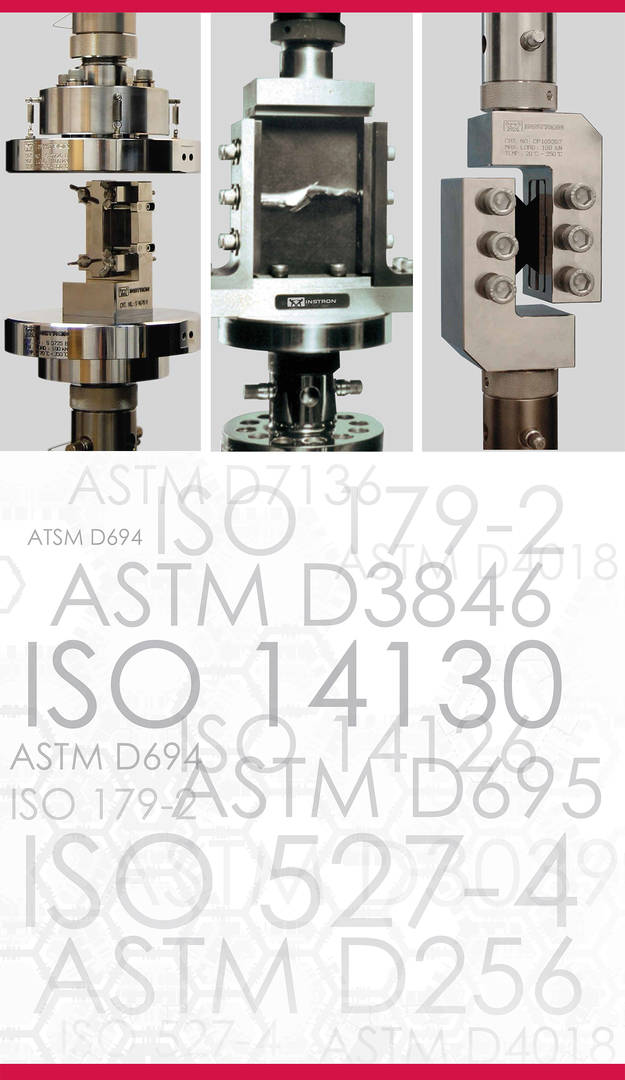