Nitinol wire is a superelastic alloy with unique shape-memory properties that render it especially useful for a variety of different applications across industries. As nitinol requires a great deal of motion and flexibility in its applications, mechanical testing of nitinol must reach very high fatigue strains.

In an example of testing nitinol, the nitinol rod was clamped in place on the ElectroPuls™ E3000 using 3 kN pneumatic grips and flat serrated grip faces. Gripping pressure needed to be sufficient so the specimen did not slip during testing, but not so high that the grip faces created indentations in the nitinol. The test was run in load control between 10–700 N of tension with a triangular waveform. The frequency of the test was increased sequentially in blocks of 0.01Hz, 1Hz, 10Hz, 30Hz and 60 Hz, and the metal was expected to exert an elongation of approximately 7%.

High-frequency, high-capacity testing creates several challenges around specimen gripping, achieving load peaks, and quick increases in frequency. Slippage can become a problem if nitinol specimens are in the form of rounded rods or wire and relatively high loads are being applied. Instron has solved the issue of specimen slippage with wedge action pneumatic grips, which apply an increased gripping force as tensile load is increased. This ensures that the nitinol remains secure for the duration of the test. 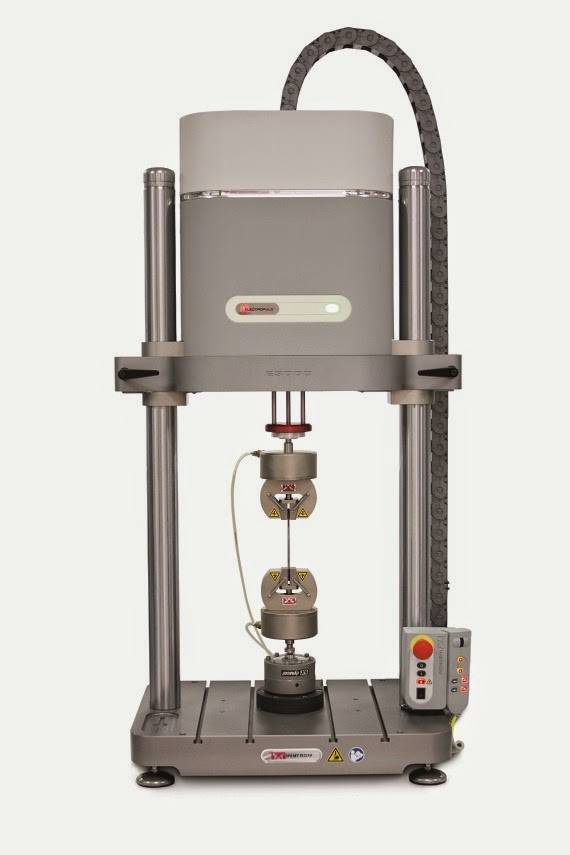 E3000 with Pneumatic Grips and a Metal Rod